Perhaps my favorite reason for being a January (5th!) baby is how it conveniently aligns with the calendar new year. I get to ring in the new year and turn one year older, and it always feels like a double fresh start.

I’ve never been one to create new year’s resolutions, simply because I don’t believe that one should have to wait for the beginning of the new year to start working towards their goals and ambitions. If you want something, take action now.

END_OF_DOCUMENT_TOKEN_TO_BE_REPLACED 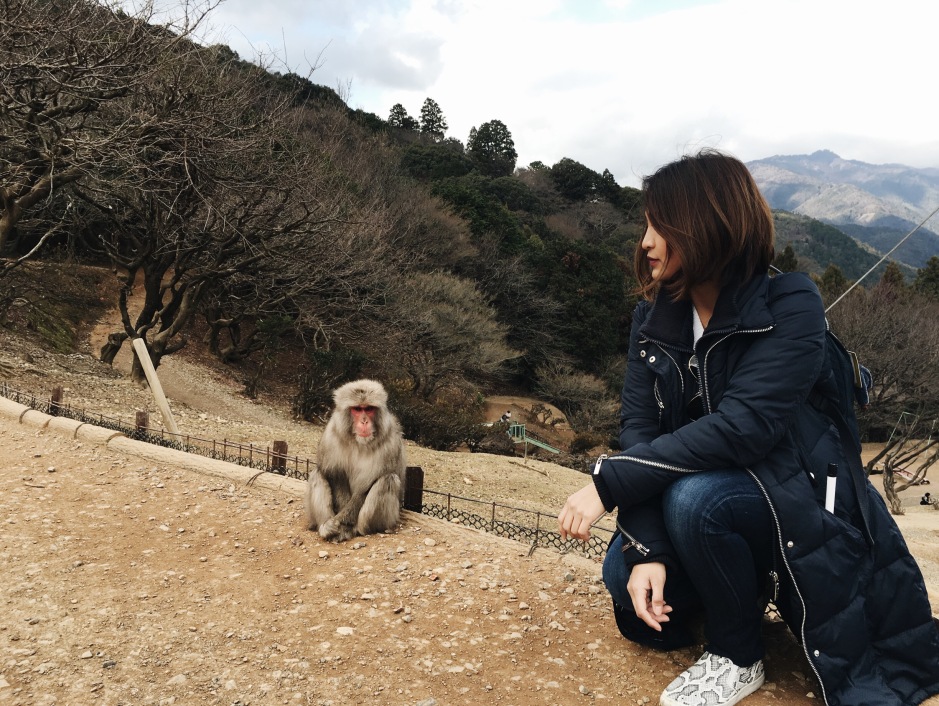 After 8 months of planning, I finally completed my first solo international trip! I spent 10 days in Japan, exploring Tokyo, Osaka, Kyoto, and Nara. It’s been exactly a week since I returned home, and I’ve had enough time to digest what exactly I put myself through. Below are some tips and lessons I learned firsthand as a first time female solo traveler.

This tip is particularly important if you do not speak the language in your intended destination. You don’t want to be completely lost and helpless in a foreign country unable to contact anyone for help. I definitely learned this lesson the hard way. Prior to my trip, I contemplated getting a pocket wifi, because I had this half noble, half delusional idea of traveling the old-fashioned way (using printed maps and asking locals). I wanted to feel like a traveler, not a tourist. My first AirBnb host, much to my surprise, lent me a pocket WiFi for free, which helped tremendously during my first three days in Tokyo. I was able to navigate through the city pretty smoothly since Google Maps was handy. It even helped me get a good grip on Tokyo’s spaghetti-like subways as well, which I learned is only intimidating at first. Once you get the system, you realize how efficient it is! It wasn’t until I had to return my pocket WiFi that I learned how much of a mistake it was not to get one for my own. Precious hours were lost with me either getting lost, not knowing how to read the signs, going in the opposite direction, or being unable to find the nearest subway/bus station. On the bright side, it forced me to hone my social skills and interact with the locals.

Google Translate helped a lot when asking for directions and purchasing subway and bus fares. Unfortunately, I was only able to use it during the first three days of my trip because it needed WiFi/data to function, hence Tip #1.

Pocket Lingo (Japanese) – The app proved to be reliable, because it not only translates phrases, it also has a built-in voice system. For example, if you click the phrase, “Good morning,” it displays the words in Japanese characters, the pronunciation, and the audio of a native-speaker saying it. There were times were I felt as if someone cut my tongue off while I was in Japan. It was so difficult for me to communicate and express myself. I relied heavily on hand gestures and head nods. The language barrier was a struggle, and it was frustrating at times to be honest. Having a pocket translator app eased the strain.

Ulmon: CityMaps2Go – I discovered Ulmon after it was suggested by one of my avid traveler friends. It’s free, and users can download maps of cities all over the world, which can be viewed even without WiFi! The app also includes a “Discover” section where users can view tips where to eat, where to go, what to do, depending on the cities they’ve downloaded.

Currency converter – This app isn’t necessary, but it helps especially for those trying to keep track of a budget. It’s very easy to overspend abroad. I can’t recall how many almost-purchases I had, simply because I was unaware of just expensive they were. ¥4800 for  basic a camera strap, anyone?

I knew Japan was going to be an expensive country in general, so I tried my best to cut costs. The easiest way I did so was staying at hostels. I have multiple avid travelers in my circle of friends, and staying at hostels was a recommendation across the board. It was my first time traveling solo in a foreign country, so I had my hesitations, but I bit the bullet anyway.After doing my research on HostelWorld and TripAdvisor, I booked a total of 5 nights at J-Hoppers Hostels (2 in Osaka, 3 in Kyoto). My experience in both hostels were exceptional. Not once did I feel like I was “roughin’ it.” I stayed in a female dormitory room in Osaka (bunk beds). Two nights cost me around $46. In Kyoto, I opted for a single room, which surprisingly was traditional Japanese style with tatami mats, and the total was $97 for three nights. Both locations were clean, comfortable, conveniently located to a local subway station, and had the most welcoming and helpful English-speaking staff. They were also able to give tips on how to get around the city, where to eat the best food, etc. Staying at hostels is also a great opportunity to meet fellow travelers/potentially life-long friends!

4) Bring cash, both your destination’s local currency and US dollars (or your country’s currency)

I carried ¥58,000 and $200 in cash when I arrived in Japan as well as a credit card with no foreign transaction fees. I decided to bring American dollars, just in case of an emergency (which I had — a shopping emergency). I didn’t have enough Japanese yens, and the vendor didn’t accept credit cards. Thankfully, there was a foreign exchange currency nearby, and I was able to exchange my American dollars with no hassle since I didn’t need to track down an ATM machine, which I’m positive would demand an additional fee as well to use.

I hope this is self-explanatory. Remember: you are the foreigner. Please do not be arrogant enough to expect the locals to accommodate to you and cater to your needs and comfort level. You’re in their homeland.The top phrases I used during my trip was “Sumimasen” (excuse me), “Arigato gozaimasu” (thank you), and “ikura desu ka?” (how much?).

Make copies of your passport, flight itineraries, lodging reservations, and Driver’s License/ID card, just in case a secondary form of identification is needed.

For my 24th birthday, I went to New York City with my best girlfriends. I brought a 50lbs rolling luggage AND a 15lbs carry-on. It not only drained me physically (our hotel didn’t have an elevator, and our room was on the fourth floor) but emotionally as well. I vowed never to repeat the same mistake again. For my trip to Japan, I challenged myself to pack light, so I invested in a pack, REI Crestrail 65, and it definitely paid off. As soon as I landed in Narita International Airport, I was greeted by stairs and stairs and more stairs. My pack was bulky, yes, but I didn’t haul ass just to carry it. Another perk was I didn’t have to waste time worrying about what to wear. I brought 3 pairs of pants, 1 heavy jacket, 2 pairs of shoes, 5 pairs of sweaters, 2 scarves, all of which I was able to mix and match. It was liberating not wasting hours contemplating something so trivial such as outfits.

Thank you for reading! Feel free to leave comments and ask questions! Stay tuned for more!

I recently started a new chapter of my life this past June by moving in to a two-bedroom townhouse in the heart of Los Angeles with my best friend of 13 years! The mattress I was using prior was borrowed, and I knew that it’s time for me to graduate, put my girl pants on and buy myself my very own mattress.

A lot of my family members and relatives own Tempur Pedic mattress, and naturally, I was inclined to purchase one of my own. I knew the $2,000 price tag would be heavy on my pocket, but I wanted a memory foam mattress. I didn’t realize I had a choice. I thought that if I wanted quality mattress, I would need to set aside a few thousand bucks for it.

END_OF_DOCUMENT_TOKEN_TO_BE_REPLACED

A few days ago, I came across a photo on the Internet that I feel best sums up what it really means to live a congruent life. The picture states:

Make a list of things that make you happy.

Make a list of things you do every day.

I truly believe that the happiest people are the most congruent, the individuals whose thoughts and actions are in perfect alignment. Every day, the constantly strive to marry what they say with what they do. When they set their alarms at 6:00am to exercise, they make it happen even when they don’t feel like it.

I think the quote above can also be applied to the relationships in our lives. This past weekend, I reunited with an old high school friend who vented to me his frustrations about being surrounded by toxic people in his life. The pressures and stresses of regularly dealing with unreliable and unmotivated individuals truly weighed him down. He sighed, “You have friends now that you’ve known for more than a decade. That friendship and bond you have with your best friends Justine and Nikki and the Vaklas… I don’t have that in my life.”

After our meeting, I reflected on our conversation and couldn’t help but feel extreme gratitude for the deep relationships and friendships I have in my life. At this point in my life, I can say with certainty that there is absolutely nobody in my life who I don’t want in it, and it has taken me 24 years to realize that it is one of the most hard-earned prizes of adulthood.

A majority of people live their lives settling for shallow relationships and connections with other people they know do not contribute to their growth, emotional vampires who suck life and joy and bring pain and heartache instead. I believe that cutting ties with toxic people in our lives is simple, but not easy. Just like the quote above, I think one of the most efficient strategies is to create two lists:

2) Make a list of people that we surround ourselves with

The ultimate goal of list #2 is to be in alignment with list #1. If individuals on list #2 do not possess qualities and traits listed on list #1, have the courage to take the leap and cut ties with them. Disconnecting ourselves from toxic people is never easy, but postponing or making excuses out of fear implies that we’re not functioning adults capable of making our own decisions regarding who can and can’t be  part of our lives. We are more powerful than that.

More bread in your feed. #challah
Quarantine got me reminiscing on my birthday trip at Bryce Canyon! Posted more photos on my blog (link in bio).
Posted more photos on the blog about our weekend getaway in #Sedona!
Finally blogged about my experience at the #TajMahal! I also included travel tips/info for anyone who wishes to visit! #linkinbio
You keep me safe, and I’ll keep you wild. 💕
🎋Kyoto, my forever favorite city in the world.
Hey everyone, quick life tip - explore Japan.
It’s been a minute.