I firmly believe that the best places on Earth are the most difficult to reach. This belief was strongly tested nearly a year ago when I decided to embark on my second international solo travel.

END_OF_DOCUMENT_TOKEN_TO_BE_REPLACED

After 25 (and a half) long years, I finally crossed off one of my top bucket list items: skydive!

END_OF_DOCUMENT_TOKEN_TO_BE_REPLACED

With my trip to Japan coming to a close, I chose to take a day trip out of Kyoto and explore its neighboring city of Nara. I didn’t want to pass up the opportunity to visit Nara’s temples and most importantly, the deers!

For a few brief decades from 710 to 784, the capital of Japan was located in present day Nara City. The influence of the successive emperors of the era can still be witnessed today through the countless of surviving historical Buddhist images and buildings scattered all over the city.

HOW TO GET AROUND

Getting around Nara is fairly simple as the city isn’t very large. It’s a 1 hour train ride from Kyoto and I arrived early in the morning at the JR Nara Station. From there, I walked to every site, although buses are readily available.

Before touring the city, I suggest stopping by the Nara Visitor Center, located one block east of JR Nara Station, and picking up a copy of a Nara City Sightseeing Guide map or you can download the PDF version here!

Why are there so many deer in the park?

“According to legend, when Kasuga Taisha Shrine was founded as a family shrine for the Fujiwaras, a dominant aristrocrat clan in the 8th century, they invited a mighty god from Kashima Shrine. The god is said to have come to Nara riding on a white deer Since then, deer have been respected and protected as divine messengers by local people.” 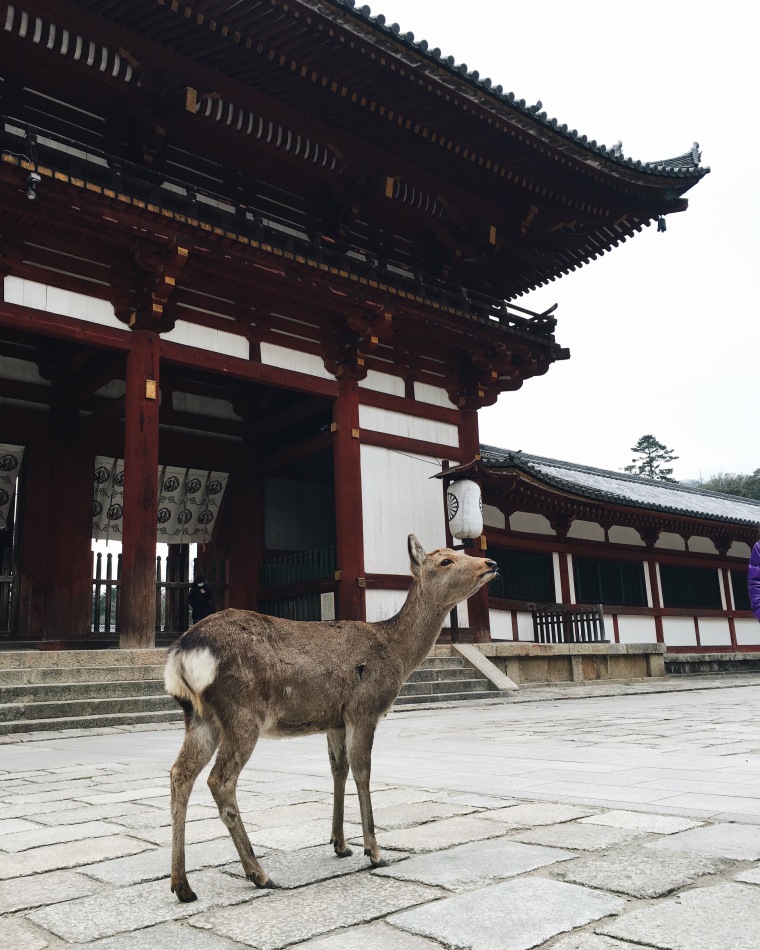 Check out my other travel guides: Tokyo, Osaka, and Kyoto!

Wide-eyed with enchantment, I stroll leisurely through the narrow lanes of Higashiyama District, overflowing with complete disbelief that I was not a) time traveling and/or b) lucid dreaming. The streets of Higashiyama are paved with cobble stones and are lined with wooden Japanese buildings. Cafes, restaurants, and traditional merchant shops are situated side by side along the historic area, selling local specialties including but not limited to the best mochi desserts you will ever taste and the best matcha ice creams you will ever taste.

Unlike its metropolitan counterparts, Kyoto is devoid of the hustle and bustle of city life, but rather possessing the quintessential Japanese charm. Age old temples and shrines can literally be found in every corner and the unique architecture invoke a feeling of old Japan. If Lost in Translation is to Tokyo, then Memoirs of a Geisha is to Kyoto.

END_OF_DOCUMENT_TOKEN_TO_BE_REPLACED

If you’re like me and Tokyo is your first stop, make sure to book your flight to land at Haneda, not Narita International Airport. Flying to Haneda will save you not only time but money as well. Narita airport is located about an hour or so away by train from central Tokyo. Although visitors can ride the Narita Express from Narita, a one-way trip costs around $30.00. Haneda airport, on the other hand, is closer to the heart of Tokyo, and visitors can reach the city center by riding the Tokyo Monorail and the JR Yamanote Line in about 25 minutes for a fraction of the price.